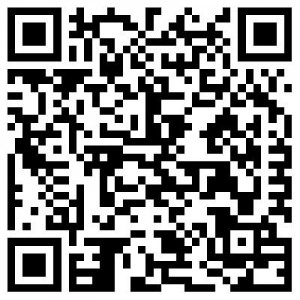 I’ve made scanning QR codes a kind of hobby. I scan them on signs, automobiles, business cards and brochures. Unfortunately, most of the ones I’ve scanned have had problems. Today I’m going to discuss things to do and not to do with QR codes.

1. Don’t create a QR code for your website home page

There’s an exception to that rule, which I’ll get to in a moment, but most of the time you’ll want to avoid it.

I see QR codes to website home pages all the time on business cards and brochures. Why bother? Every time I’ve seen it, the URL to the page was printed on the card or brochure. Adding the QR code was redundant.

Also, most of the time, the QR code goes to a desktop version of a site. Remember that QR codes are intended to be scanned on phones. Phones don’t display desktop sites well.

Which leads us to the one exception to the rule. If your QR code goes to a mobile version of your home page, and that page has information useful to someone on their phone (like a Map location or phone number), then it might make sense.

2. Don’t create a QR code to a secure website

I saw this at a conference once, and I had to restrain the eyeroll. The company specialized in mobile data encryption (a good thing), but the QR code linked to a site which required a log in. As a marketing device, that was a big fail. Worse? The company representative did not get it when I tried to explain why this was a bad thing.

QR codes aren’t quite the rage they were several years ago, but people still stick them on business cards because they think they should. Before creating a QR code, think about what you want someone to do when they’ve scanned it and viewed the site.

Let me use the QR code on my business card as an example. It’s below a picture of my book, The Enthusiastic Networker, and it takes you to the Buy It Now page on Amazon. I hope people will look at the cover of my book and want more information. Scanning the code gives them that and the option to buy. Strategic, not random. (And it works. I’ve seen people buy it on the spot.) 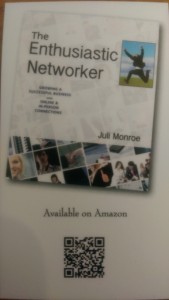 So think about what action you want people to take and create a QR code for that purpose. Take them to a special landing page for an offer or to your blog, if that’s what you want to promote. Something which will help you and your business.

QR codes on vehicles make me laugh (or cry, depending). I envision drivers scanning them while driving, which makes me feel unsafe when driving by a truck with a code.

I once saw a huge QR code on the top of a building. Even though it was huge, it was still too small for me to capture with my phone. Fail.

And my personal favorite. Go ahead. You know you want to look.

There. Now you won’t make some common QR code mistakes, and you’ll be sure to use them well. By the way, did you scan the code at the beginning of the article? It’s not a random code. I generated it for a reason. 🙂