Social Media Automation: Is It Worth Doing? 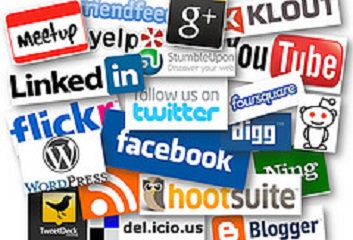 I’ve been a user of Hootsuite for years, and I love it, so it’s probably obvious that I’m at least somewhat in favor of social media automation. I appreciate how the scheduling feature allows me to manage my time and be active throughout the day while still having time to work with clients, write and do all the non-social media activities which make up my day.

In preparation for a class I was teaching last month, I decided to try out Tweet Jukebox. It takes automation to a new level by literally automating tweets. A quick description. You create a “jukebox” which you load with tweets. The service then sends out those tweets, in a random order, on a schedule of your choosing. I loaded a jukebox with my blog posts (58!) and turned it on.

I turned it off after only a day. Why? Because I hated how it looked in my Twitter stream. I had a bunch of tweets of my blog posts, not broken up with shares, interactions or anything else.

And then I looked at my Twitter analytics for that day. My Jukebox tweets had more engagement and brought me more followers than anything else I had done in months. Sigh. Obviously, this level of automation has value, if I could figure out how to make it work for me.

Let me start with some “Please, whatever you do, don’t do these” points. Now that I’ve been using Tweet Jukebox, I recognize the tell-tale signs in my Twitter stream. By the way, there are other services, similar to Tweet Jukebox, like the paid versions of Buffer, and many of these points apply to them as well.

1. Don’t set up your Jukebox and forget about it 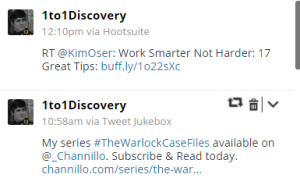 See how Hootsuite tells you how the tweet was posted. Cool feature!

I was scratching my head one day in November as I watched a bunch of Halloween tweets go by in my stream. They were all from the same person, and I couldn’t figure out why they were repeating themselves, seemingly daily. Then the same thing happened in January with a bunch of Christmas tweets. I finally noticed (because Hootsuite is awesome and shows the source of the tweet), that they were all coming from Tweet Jukebox, and then I got it. This person had set up holiday jukeboxes, turned them on and then forgot about them.

The holiday jukebox idea was a good one, but she needed to be on top of it to remember to turn it off.

2. Automation doesn’t relieve you of the responsibility to engage

I’ll pick on another account I follow. It used to be a pretty good account, with a nice mix of shares, original content and engagement. He was active on several Twitter chats, and, while those chat tweets were a bit much on chat days, they didn’t bother me and were often fun to watch. Then something changed. As far as I can tell, he’s basically left Twitter. He has his Jukeboxes set up to tweet out his content, but that’s it. No engagement. No sharing. Just a constant stream of self-promotional tweets, which are getting quite repetitive. I hope he comes back some day. He used to be fun.

If you’re going to set up some sort of automated account, make sure you have enough content in it to avoid duplication for a period of time. One of the accounts I mentioned above must have only 20 or 30 tweets loaded because I see the same ones multiple times a week. While I’m not against repeating and reposting content, having the same content go out so often that your followers get tired of it won’t help you either.

With all that said, I do think there is value in automation, and I did turn my Jukebox back on. However, I don’t leave it on all the time. I let it run on weekends, when I’m usually not active anyway, and I turn it on a few times a week, as a supplement to my regularly scheduled tweets. I’m also planning a second jukebox, filled with evergreen shared content, to promote people I like and add some variety to my automated content.

I guess I’m still on the fence here. I see the value in the concept, but I also see how it can be done badly and be a turn off to followers.